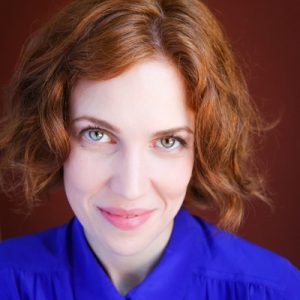 The Cast Director Hannah Chase: If we don’t take risks, we stagnate

Magnet Theater’s The Cast is enjoying a hugely successful run, including fan raves and a profile in the New York Times. Creator and director Hannah Chase spoke to WIT about the the joys and challenges of staging the show, which puts its cast in the position of improvising a theatrical production as well as the backstage antics of the actors.

Tell us about the inception of this concept—performing a theatrical play and backstage action side-by-side.

I was really excited by the idea of having a show in which improvisers can play in two very distinct styles, the onstage portion being narrative and more stylistically “dramatic,” big, and emotionally committed, and the backstage portion being more patient and grounded. I hadn’t really seen this done before and I thought showcasing a play and its players would be the perfect conceit for such a show. Once we started playing in different genres, this idea became even more pronounced.

You’ve been performing this show consistently for a while now—how has it evolved over time?

The show has come far! When we first started, the show was run as a Director Series, which is a month-long weekly run of shows where a director gets to choose a cast and experiment with a form. We had four shows and we worked on each genre over multiple rehearsals prior to the run itself. After that, we got extended for a second run (four additional shows/genres) and then eventually we became a weekly-performing weekend team. So what started as a “four genre” run turned into one in which we’ve now performed over 100 distinct genres.

This has not only been an exciting opportunity for variety and growth as a show and as improvisers, but we’ve also had to get incredibly good (and fast) at preparing for these genres, as we only have a single rehearsal each week before we have to perform. Most recently, we’re experimenting with keeping the genre open and allowing the cast to discover it organically based on the suggested title and the style of the first scene.

You’re always changing the genre of the ‘play within the play.’ How do you select the genre? Can you tell us a bit about how you prep?

Very early on, we brainstormed a huge list of genres that got us through many weeks of the show. Additional genres would come to mind based on timing or current events (i.e. we did a Gilmore Girls show the weekend before Netflix released the new season, same with Game of Thrones, Star Wars, etc). We also send out a weekly newsletter and at the bottom we always ask people for genre suggestions; we’ve gotten some great ideas from that, including our Pro-Wrestling show which was one of my favorites! We’ve repeated a few of our favorites (Dance, Musical, Experimental) but aside from that it’s pretty much been a new genre every week.

In terms of preparation, the whole cast tries to do research on the genre during the week leading up to the show, and I come to rehearsal prepared with exercises I’ve either created or tailored to work specific genre skills and muscles. Occasionally we bring in a guest coach if the genre is very specific (i.e. we did a Hamilton-esque musical and brought in a hip hop improviser to coach that rehearsal). We have one two-hour rehearsal on Friday, then we perform the next night.

What have been some of your favorite shows or moments since the show began and why were they successful?

I’ve particularly loved any genre that really gets us out of our comfort zone, so things like our “Not Hamilton” musical, our “Rest But Little” show (an immersive, silent, movement-based Shakespeare piece, in the vein of Sleep No More), any of our dance/movement shows (we’ve done dance company, mime, clown, and we recently improvised a “visual album”).

I am also partial to shows in which the ensemble discovers something really specific and unexpected (often unrelated to the genre) and is able to fully explore and heighten that over the course of the show. One potential trap to doing narrative/genre work is that shows can sometimes focus so heavily on the genre itself that there is less room for discovery and play. I really stress the importance of staying present and open to things that happen over the course of the show, and I find that when the cast can double down on those things, whether they’re in keeping with the genre or not, those shows are usually the most exciting.

One example that comes to mind was our Children’s Theater show in which, midway through, they realized the “lesson” they were trying to teach (“Never be angry”) was really emotionally unhealthy. This led them to the discovery that the world of this play (and backstage) was a dystopian future in which a single Overlord was slowly murdering anyone who dissented. I believe the show ended with almost all of the cast members having been killed, and though it was obviously unexpected given the genre, it was such a fun and genuine discovery that the show felt truly inspired.

Personally, what thrills you and keeps you excited about performing The Cast regularly?

Honestly, the people. The cast brings so much commitment, excitement, energy, and bravery to every single show, it’s hard to not stay excited. I find the risk involved in a show like this (the risk being a new, uncharted, and therefore “unperfected” genre each week) really thrilling as a director, a player, and an audience member. Everyone involved in the show is so experienced and so good that they could basically do the thing they already know they do well each week, and we’d be guaranteed a funny show.

But the fact that they’re willing to try something new (and often scary) every week is inspiring. It reminds me that what I love about improv is this very idea: that each show is something new and unpredictable. And sometimes that new and unpredictable thing will flop, but that’s part of improv. If we don’t take risks, we stagnate and improv starts to feel predictable and safe. For me, the joy of improv is always in that risk-taking and that discovery, so this show is a perfect way to make sure I never stop doing that.

The Cast performs as part of WIT Presents: Summer School on July 21 and 22. Hannah Chase and Megan Gray (Magnet Artistic Director, The Cast performer) participate in a free director’s symposium about The Cast on Sunday, July 22 at Source.