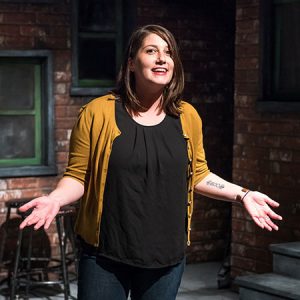 This article is the first in a series called You Do You: Taking Charge of Your Improv Destiny. Each article will focus on a different aspect of the improv world that exists outside of classes, including forming indie teams, finding a coach, and more.

Auditions are notoriously nerve-racking experiences—everyone wants to shine and, in the moment, the stakes seem huge.

Sometimes it works out, sometimes it doesn’t. But the attitude you go into the audition room with (and the attitude you leave it with) can mean everything in terms of your long-term improv goals. In fact, many of the people on WIT’s stage have been able to turn unsuccessful auditions into an opportunity to dig into their craft and return stronger than ever.

We talked to members of our ensembles and Harold teams about their audition experiences and how they approach them going in.  This is the second in a two-part series. (Read part one here.)

Right before the audition I do my best to get genuinely excited about playing with the people who will be there, rather than focusing on the (very real and present) fear. Personally, I have to let go of the audition part and just focus on having a good experience for myself.

The importance of seeing *good* shows cannot be overstated (seeing bad shows can also be helpful, but in different ways). It really helps me get unstuck, and get new ideas for things to try in rehearsals and shows. It also helps me stay plugged in with the community and meet more people to play with!

If it’s a group audition, then you need to remember that you’re there as a part of a group. Being selfish or unsupportive during the audition won’t help you out when it comes to getting on a team/in a show. Other than that, I always try to have fun when I get out in front of the audition panel. Getting self-conscious or doubting your performance while you’re doing it will be trip you up more than anything else. If you know some other people auditioning for a team, feel free to practice with them! It’ll build rapport if you’re in the same audition group, and get you warmed up for the real thing. Don’t forget to get some sleep the night before!

I made it to the callbacks for Caveat and did not get in a few years before I got on to iMusical. My prep, honestly, was to keep taking classes and to play with people I liked playing with. This was before the real boom in the indie scene, so it was a bit harder to find stage time, but I was invited to play on an early indie team with some people I really liked from a class. Just feeling comfortable playing with a group of people that I liked helped me do better improv.

I also found a niche I enjoyed playing with in musical improv. The next time I really auditioned for something was for iMusical, and I felt very confident in my audition which included a bunch of people I knew from musical improv classes, so I was really able to relax and have fun playing with them. Several of those people later went on to play with Caveat, Commonwealth, and Season Six, so just sticking to it can pay dividends.

Jenna Hall (The October Issue) – “There’s always something you could improve, even if you get in”

I try not to beat myself up too much or judge myself too harshly. It’s not productive to waste a lot of time thinking “you idiot, why weren’t you picked?!” or “those idiots, why didn’t they pick me?!” What helped me was to really think about what I could have done better and just accept it. I realized after my first Harold audition that I was not supportive enough in the scenes I did and made it my goal to support the hell out of anyone I did a scene with moving forward. There’s always something you could improve, even if you get in that doesn’t mean you’re perfect or you’re done growing.

John Carroll (Madeline) – “This is a learning experience”

“This is a learning experience.” I know I’m not coining anything brilliant here, but it really grounds me. If I treat each audition as a chance to learn, I free myself from a lot of burdens: I can’t anticipate what the director or coach needs and I can’t anticipate what fellow audition performers will do or say. By treating the audition as a learning experience, I receive a reward from the experience itself. The casting decision, good or bad, becomes a separate moment.

I was really nervous in my last audition because there was a whole panel of people watching, with pencils poised over their notepads, choosing who they wanted for house teams. But then there was a moment, mid-audition, when I looked around at the folks I was auditioning with and thought, wow–there is such talent in this room, and today I get to improvise with all of these fantastic players. How lucky am I?! When the hour was up, I left wanting to start a new indie group with everyone I just auditioned with.

Kate Symes – “You have to choose them too”

I was invited to play in with a team to see if I was a good fit. I went to one rehearsal and it was a train wreck from beginning to end. I was lost in scenes but trying so hard and nothing was working and I felt like the whole disaster was my fault. Needless to say I wasn’t invited to join the team. After that I adopted the non-attachment approach. If you white-knuckle an audition because you care so deeply about whether or not they choose you, you’re not going to do your best work. Like dating, it’s not just about them choosing you. You have to choose them too.

Alex Beard – “We are all just big ass birds”

I had an acting professor at Virginia Tech that taught us to teach auditions and job interviews like a “big ass bird.” When you watch them take off they look like they shouldn’t be in the air. They are clunky and uncoordinated. But once they get into the ebb and flow of flight, they have an appearance shift. They exude grace, and they quickly become enjoyable to watch. We are all just big ass birds.

There is also the factor of with improv and a lot of written stage work, you have to take into consideration the complexities of the ensemble. You may have crushed the audition, but the improv team may already have one or two players who are like you. Diversity in improv is important, so don’t beat yourself up.