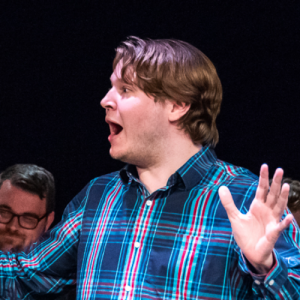 After thoroughly failing to get involved with Improv in college Hawk determined that enough was enough and enrolled in classes at WIT. Through the determined tutelage of the instructors there he has gone form a rank amateur to a hardened veteran, and is happy to say that Heirloom is his first and most noteworthy Improv project.

After a long day in the trenches of the capitalist wonderland that is the modern mortgage market, Hawk engages in a raft of escapist hobbies. Whether he’s making a fool of himself in public performances or making a fool of himself during roleplaying games, he’s never quite learned how to be embarrassed of himself. His goal is to figure out a meaningful and worthwhile goal, but in the meantime, he’s working on a podcast, like most millennials.