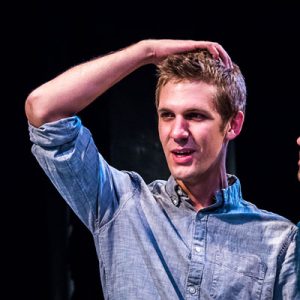 Joe's a scientist, writer, and comedian originally hailing from Columbia, Missouri. Find him after a show and he'll happily whip up some laugh chemicals and write you an essay about it.

Joe started improvising during theater camps in elementary school, and continued practicing and performing in college as a founding member of Oberlin College’s Kid Business improv troupe. He has trained and performed with the Dirty South Improv teams Flashmob, Improv Slam, Public Frenemy, and DSI’s flagship team, Mister Diplomat. Joe made the move to DC in 2015 and started learning and improvising on stage with WIT the same year.

You can find Joe running and walking his dog Howard in the mornings, doing wetlands research in the Chesapeake Bay during the day. By night, you can find him doing improv, performing stand-up comedy, or writing about science at night.