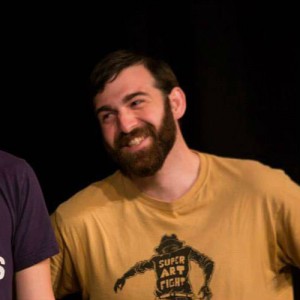 Geoff Blizard grew up in Acton, Massachusetts. He started regularly playing in improv in 2011 at American University with the Rude Mechanicals' Elite Ballerina Corps.

Geoff’s is a graduate of Washington Improv Theater’s training program. He has also completed many workshops and elective classes at WIT and with Laugh Index Theater. His first taste of performing improv came from a summer camp he went to back in middle school, followed by a pile of shortform play with the Elite Ballerina Corps at American University, where he realized that he really, really liked it.

A brief selection of other theater projects include leading roles in “Polaroid Stories,” produced by Blind Pug Arts Collective, and “The Taming of the Shrew,” and “The Eight: Reindeer Monologues,” both produced by American University’s Rude Mechanicals. His greatest theater experience will forever be “The Maltese Bodkin,” because he made a great friend by punching him repeatedly in the stomach (on stage). Geoff’s an avid tabletop RPG and board game player, whenever he actually has the time to set up a session. He believes that rule #1 of Good Gaming is “Everyone Has Fun.” Geoff is also an amateur cameraman, having worked on several 48 Hour Films with Awkward Trio productions.