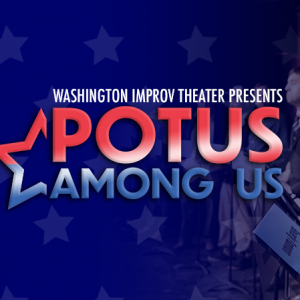 Washington Improv Theater’s quadrennial political satire, POTUS Among Us, has been retooled into an online interactive experience as wide-ranging as your imagination. POTUS is taking place – as live and recorded video content, web content, and social media engagement – now through the week of Election Day. WE WANT YOU to take part!

The whole world will be able to participate as concerned citizens and voters by watching and interacting with the online campaigns once they launch, on social media, YouTube, and WIT’s website.

Improvisers and those with certain sets of skills can have more fun than just watching, by joining one of several teams creating the POTUS experience. You can:

We believe everyone has something at stake in America’s democratic experiment, so the usual barriers to entry (U.S. citizenship, 35+ age requirement, personal wealth, political know-how) have all been removed. Human decency has been introduced as a requirement. [Seriously, any candidates or participants bringing hate-speech to the party will be warned, contextualized, and/or removed from play.]

The creative teams making POTUS happen are listed below. You can join multiple teams, but ideally you would play only one main on-screen character. So you can’t play a candidate and a news anchor, for example, you need to choose one. Think of it as our version of the Marvel Cinematic Universe.

Registration deadlines for teams have been extended – each team’s sign-up deadline is noted below.

The Politicians: Candidates and Campaign Teams

Play whatever role you want: be a candidate, a campaign manager, or a staffer. Don’t just see how the sausage is made – be the stuffing! Activities will include honing a message, creating stump speech videos, doing online Town Halls, debating other candidates, etc.

Candidates: What kind of candidate do you want to embody, or support? You can be as serious or silly as you wish. Lobbyist influence peddler. Fringy lunatic. Wall Street Fat Cat (like literally a fat cat). Wonk with all of the fact-based policy answers. Vegan cupcake apologist. Radical environmentalist. Flag-hugging patriot. No matter how silly or serious, each candidate will be on equal footing as they start their campaigns. Make your case as compellingly as possible, jump through the process hoops that the Elections Committee establishes, and you could be on your way to election.

Sign-up Deadline to be a Candidate assigned to one of the three political parties in POTUS (and therefore who can take place in the party debates on Sat. Oct. 8) has been extended to 11:59pm Wednesday, Sept. 30.

Educating the electorate. Entertaining the electorate. Is there a difference? Can the Fourth Estate save us from ourselves this time? Will they try? With the internet as our main platform, there’s a lot of airtime at our disposal! Help flesh out this world as a reporter, a writer, producer, pollster, news anchor, commentator, you-name-it. Media roles will run the spectrum from on-air to completely off-air activity.

What kind of media do you want to embody or support? Hard-hitting fact-based journalist? Rabid partisan demagogue (parties in POTUS are TBD)? Conspiracy whack-job? Sex-obsessed scandal-monger? Bright and cheery morning pablum? The POTUS media team will be producing some specific main-stream media, but we’re also interested in helping to present whatever aspect of the media you may want to explore, so feel free to bring your ideas!

The Sign-up Deadline for the POTUS Among Us Media World has passed. If you wish to launch your own independent media project in the world of POTUS, you are encouraged to do so. Please be mindful of the rules for the POTUS universe, as laid out below.

Do you have skills such as news writing, video production and editing, online broadcasting, graphic design? Do you have connections in grass-roots democracy and advocacy communities? The Technical Assistance team will work behind the scenes (and primarily off-screen) to help all of the POTUS programming happen.

Sign-up Deadline to help on the Technical Assistance team has been extended to 11:59pm Monday, Sept. 14.

The rules and guidelines below are those we’ve established so far. New rules may emerge as we move through the process of the show.

Candidates
We are not portraying actual candidates from the 2020 election. The world of POTUS Among Us 2020 is exactly like our world – but in a parallel universe way. Today is today, Election Day is Nov. 3 (or thereabouts). We just don’t have Trump, Biden, or any other actual candidates. The point is to explore a world where everyone has access to running for President, so keep your Biden and Trump impressions for another project. The show is future-focused. For practical purposes, there is a current incumbent who is not eligible to run. At this point, we don’t think the incumbent will play a major role.

Time
The POTUS Among Us world operates on the same calendar as the real world, but it’s an alternate timeline with different parties and candidates. Any deadlines are Eastern Time (U.S.)

Money
Participating in POTUS Among Us 2020 doesn’t cost anything (except maybe whatever your internet access costs). WIT’s campaign finance laws dictate that $0.00 is available to each campaign for reimbursable expenses. That’s ZERO dollars.

The Campaign Process
There’s an Elections Committee charged with creating and governing a fair election process. They’ll organize events like party conventions, debates, Town Halls, etc., and they’ll do it responsively in a way that tries to spark engagement. There will be “hurdles” for campaigns to clear – probably online engagement metrics – in order to participate in official “mainstream” election campaign events like debates. The Elections Committee may organize candidates into parties, in which case only one candidate will gain each party’s nomination. But that would not mandate that other candidates suspend their campaigns. The Media Team will be doing their job of educating voters about the campaign, and keeping things interesting. As in real life, the Media Team may favor some candidates more than others – cracking that formula will be part of the challenge.

The Election
The final election of the President for POTUS Among Us 2020 will take place through some form of online voting on or around Election Day. Mail-in ballots will not be required.

An Unprecedented Show in Unprecedented Times
The POTUS Among Us 2020 project is unlike anything WIT has done before. We’re not used to building a show that is ALL video and online engagement. And we’ve never done a show that was this wide-ranging, radically inclusive, and emergent (we’re starting it before we know what final shape it may take). We’re not just creating a 75-minute stage experience, we’re creating a universe where people are invited to engage on their own schedule and at their own level of fun/comfort. One thing we want to emphasize: YOUR point of view and sense of humor are welcome, and we expect the tone of the POTUS experience to cover the wide spectrum from poignant to preposterous. From sharp-bladed satire to sappy sentimentalism.

About Content Control
Any POTUS-related content produced and submitted becomes shared. WIT has the right to remove any and all content from WIT-run online platforms. We intend POTUS to include a wide range of perspectives including edgy satire. That said, if content is found to be objectionable or confusing, WIT reserves the right to add contextualizing language and/or to remove it from all WIT-run sites.