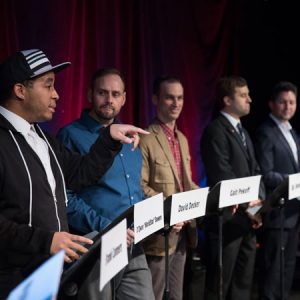 Now halfway through its run, Washington Improv Theater’s POTUS Among Us has enjoyed glowing reviews and two weekends of sold-out performances. WIT Artistic/Executive Director Mark Chalfant and theater artist Melanie Harker conceived and directed the 2016 production of this quadrennial show, with a cast of 19 players devising aspects of the show along the way. The directors took some time to talk about what it was like to devise a completely new take on the show and some of their favorite moments from the rehearsal process.

When plans for POTUS Among Us started to come together, what was the main idea you wanted to explore. For instance, the 2012 production focused heavily on the media.

Mark Chalfant: We wanted to explore two things: candidates with big personalities and a process that feels more like a circus than how a democratic republic would orchestrate its transfer of power. So much of the actual race this year, including the primaries, seemed focused on candidates’ personalities and “likeability,” and not necessarily experience or expertise. We wanted to play with that deliberately.

Melanie Harker: I got involved in POTUS because I was interested in putting together a cathartic theatrical experience that would allow us not to feel so helpless with the barrage of craziness that this election cycle has served up. The show is silly and serious; we need to wrestle with those emotions when it comes to our personal political viewpoints.

Devising a show like POTUS Among Us is a slow, iterative process. What were some of the biggest breakthroughs you made in the journey to arriving at the final product.

Chalfant: One breakthrough came from a failure, which is something we’re used to in improv but was still nerve racking. We planned to use a large Wheel-of-Fortune size game board for the show, to really heighten the game-show aesthetic of Act 2. But the construction was a lot more difficult and time-consuming than our designer planned for, so preview night came and there was no board. We worked-around by printing a small game board for each patron to use and it worked wonderfully. The audience was yelling out which games/scenes to do next and there was no sense at all of anything being “missing.” As a result, we scrapped the board from the production. Finding the tone for the host was something that preoccupied me, and it turns out the host can take almost any tone and the show will still work.

Harker: This was a very difficult show to devise—it’s complicated and relies on the players feeling comfortable with all of the moving parts. While we are talking about improvisers here and there may be an assumption that they can “go with the flow,” every performer requires some kind of enabling constraint to play within, which helps steer the direction they play in. Once we settled on some kind of structure, what took it to the finish line was each player relying on a basic improv principal—every member of your team has your back.

You did several dress rehearsals with guest audiences. What were some of the changes that came about because of those rehearsals?

Chalfant: Test audiences helped us figure out how we could play with money and fundraising live in the room in a way that feels satisfying and truthful. They also told us in no uncertain terms that THEY WANT TO KNOW WHO WINS THE ELECTION right away—we had originally planned to announce winners by social media at midnight, but test audiences were very unhappy with that.

Harker: To echo Mark — we had planned to not tell the audience who won the election in an effort to focus on the process instead of the result. But this feedback helped us come up with the fun convention announcement moment which now caps the show. Invited audiences at these dress rehearsals also craved more interaction, which helped give permission to our cast to reach even further out of their comfort zone.

The cast for POTUS is awesome! How was it working with such a large ensemble of performers, many of whom hadn’t performed together much before (if at all)?

Chalfant: “Delightful” is not an exaggeration. These players are a great mix of seasoned and confident and playful and they all came together very smoothly. I think it’s a testament to the warm culture of each of their respective ensembles.

Harker: It has been so incredible to get a chance to see the process of these players, many of whom I’ve never worked with in this fashion. We have a great line-up of heavy hitters who also know how to melt into a team and make smart choices to support their fellow players.

Tell us about one of your favorite moments from the rehearsal process — something that surprised or delighted you.

Harker: During one of our early rehearsals we asked the cast to come up with a format for a game which we gave a title to: Not So Secret Service. We had three groups — as one of them started to present their game format, another group seamlessly edited and played in following the format, and then the third followed. It was funny, smartly played, and definitely unexpected. That was the moment I knew this show was going to work.

The real-life 2016 election cycle has been so absurd with all of the scandals and larger-than-life characters. How much did you want this show to mirror 2016’s unique circus-like atmosphere?

Chalfant: We mostly wanted the show to be a fun break from the non-stop churn of campaign headlines, but we also tried to hide some opportunities for contemplation throughout the show. When your favorite candidate is gone from the show 15 minutes in because you didn’t help them raise enough money, or when a candidate advances purely on charisma and personality, those are things to consider.

Now that POTUS has opened, has anything surprised you about the audience responses?

Chalfant: I’ve been delighted by how game the audience is to play. On opening night one of the candidates (played by Denny Johnson) invited three audience members from the audience into his meditation chamber ON STAGE, and they came without hesitation.

Harker: Having a lot of experience with audience integration and engagement in performance, I knew that if we framed the show in the right way and set the tone, everyone was going to play along. We had one show where a young woman, without prompting, came right up on stage and took part of the scene by being a tour-guide to one of the candidates. No one in the cast had any connection to her—I hope she comes back to a WIT show in the future. That’s the kind of engagement I live for!