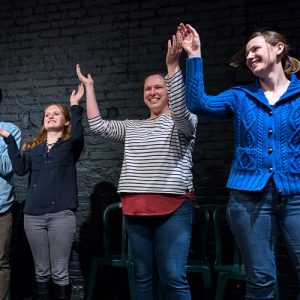 Cast members Rob Miller and Jess Lee discuss the upcoming show in WIT Presents: Summer School, “King Bee: Off-Book.” King Bee’s flair for the dramatic reaches new heights as the cast brings their newly developed format inspired by real play scripts to life. The catch? They abandon the scripts after the first few pages and improvise their way to the final blackout.

You receive a new play script every performance; what have been some of the biggest surprises in the rehearsal process?

Miller: I think I have been surprised most by how close or far we get to actually get to the premise of the story. I find it exceptionally pleasing when thinking “man, we went really crazy with our scenework” only to find out that the actual characters and premise go way crazier/darker/weirder than any of us performing could have imagined. After performing a piece, I end up wanting to read the full script!

Lee: The scripts are wild. I thought, “two pages of a script should give us a basic start,” but the scripts have been anything but basic. The assumption that theater is stiffer than improv has been flipped for me through this process. Both are weird and wonderful.

“An actor’s nightmare is an improviser’s delight.” Are there any improvisers in King Bee with a taste for scripted acting, too?

Miller: Are you directing this question directly at 8th grade Rob who dressed in his sister’s leather coat and played “Rocky” in his church’s annual Christmas play? Part of the fun in playing with King Bee is that I think we inherently enjoy the theatrics of a good scene as much as we do the humor, so when we get to dabble in acting out these lines, we feel a sense of pride in bringing these scripts to life.

Lee: My acting career began at age 10, when I landed the lead role in “Cinderfellow.” I went from being cast in male roles in elementary school to being cast as the mother in multiple high school plays. Which is why I do improv. Because nobody puts baby in a corner.

How much liberty do you take with scripts? Do you intend to try to carry out these scripts to their logical conclusion as written by the playwright? Or do you intend to make them your own?

Miller: I would say that rarely do we try to follow the scripts to the logical conclusion (though following an illogical conclusion sometimes ends up telling the actual ending to the script). We do our best to make them our own while also honoring the characters and scene-painting the playwright has done through their storytelling.

Lee: We don’t take any liberty with the part of the script we see, which is 1-2 pages of it. That we honor. From that point on though – we are flying blind. We can’t know what the playwright was thinking, but what we know from those first two pages (characters, plot, tone, setting) sets us on course to find our own conclusion. It ends up being a mash up of the playwright’s beginning and our ending.

What is the most exciting part about using a script as a launch-point?

Miller: We work with only a page or two of script, so we work hard to pick up on the tiny intricacies that define the characters and environment they are in to help us push the story along. We, as humans, are naturally drawn to storytelling, so I enjoy getting just a taste of a script and then building an entire world of characters around the base scene. We never know who/what will influence the main characters of the play, but I am always amused as we get to see how external factors play into the larger world.

Lee: We are just as surprised as the audience. It’s a group discovery of a treasure map, and then we all go on the hunt together. Is that too cheesy?

How have these scripts set you up to do a show unlike a normal King Bee show? Are they more dramatic? Weirder?

Miller: The most current shows we’ve been doing have been heavily focused on locations, so keying into the depths of character deals and relationship dynamics has definitely been a change. I think we walk a fine line between dramatic and weird, which is what makes this show concept work.

Lee: Usually, King Bee will bounce around to different stories and worlds. This format has us focusing in. When we are on the sidelines, we aren’t just asking ourselves, “how do we serve the scene,” we are also asking ourselves, “how do we serve this story?” There is more balance of drama to humor, but King Bee has always been weird – so that’s our thread that continues. You’re welcome.

Were any playwrights harmed in the making of this show?

Miller: I guess we will find out soon enough. Here’s to hoping a few of them end up in the audience to see another parallel universe of their original story!

When will King Bee figuratively (and maybe literally) throw the pages in the air? Check out the show schedule here.