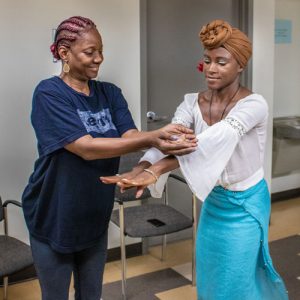 For the past year, Washington Improv Theater has provided empowerment and catharsis for clients at Calvary Women’s Services—a nonprofit in Anacostia that helps women experiencing homelessness get back on their feet.

WIT ensemble member and teacher Krystal Ramseur leads the sessions, which recently included a visit from a George Washington University nursing student named Lily who has been working with the women. Lily wrote about her experience dropping into the improv session and articulated how improv fostered connection between the participants and allowed everyone to play in an atmosphere devoid of stigma and judgement.

The next part of the day was… amazing. In its purest sense of the word, amazing is the only way I can describe that Improv class. We started by making silly noises and copying each other’s motions and eventually started performing full on scenes. These women are funny! I didn’t laugh this hard at a real improv show! Some of them truly have a hidden talent.

In those moments, when all the barriers were down, it didn’t matter who was homeless or not, who was a student or a resident, who was black or white – all that mattered was the laughter that filled the room. I can only imagine the entire street heard us because we were jumping and screaming and dancing. The amount of love and acceptance that this cohort of women has, consumes their fears and worries in moments like those and I was so proud to be a part of it. One of the women even hugged me at the end of the session. I closed my eyes and enjoyed every moment of her embrace.

The use of Improv as a communication tool actually got me wondering if there is such a method that is used by healthcare professionals and wouldn’t you know it, it’s called drama therapy. Psychodrama, drama therapy, and other branches of the same subject are rarely researched despite the fact it has been used since the 20th century. Once study noted that patients who had participated in psychodrama therapy had a decreased level of cortisol in their saliva afterwards proving that such therapy can decrease stress! Nuts! I can’t wait to see how this practice evolves.

WIT’s work at Calvary Women’s Services is funded by the WIT Community Fund, whose portfolio also includes improv workshops for veterans returning from combat, students in DC Public Schools, and Washingtons from every walk of life (via Improv for All workshops).

DONATE TO THE COMMUNITY FUND

If you’d like to make a major gift to support the Community Fund, email dan@witdc.org.