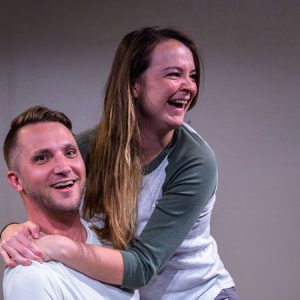 Kelsey Peters on The Feminine Experience: “This show has truly changed my life”

For anyone who’s watched a Harold Night, Kelsey Peters has probably made them laugh. In addition to being a founding member of the Harold team Wonder Whale, she’s a member of multiple indie teams including Puss and Kooch, Trustfall, and Unknown Number just to name a few.

On Feb. 25 and March 4, Peters will make her directorial debut with WIT’s The Feminine Experience. Having served as assistant director of the show in its previous incarnation of Vagina: An Improvised Monologue Show, she recruited assistant director Krystal Ramseur and a cast of female-identifying and nonbinary performers will present “a completely improvised, uncensored, uninhibited, unapologetic show about vaginas, femininity, and redefining it all.”

We wanted to know more about Kelsey’s work and the show, and she kindly obliged.

For the uninitiated, can you describe what audiences can expect from The Feminine Experience? How does it differ from its previous incarnation Vagina: An Improvised Monologue Show?

The Feminine Experience is kind of like having a really heartwarming, powerful conversation with a friend, except instead of a friend, it’s an entire audience. You can expect real, raw stories about vaginas, gender-based violence, overcoming trauma, survival, periods, motherhood, mind-blowing orgasms, and all the things that make up the experience of  identifying as, or being labeled, feminine. The true stories are improvised based off a monologue suggestion. There will be no long-form improv scenes.

The format is generally the same as Vagina: An Improvised Monologue Show, but it’s aiming to be more inclusive to those that are subject to gender-based violence. To clarify, I use “womxn” instead of “women” in this interview because not all the members of the cast identify this way, and to denote gender fluidity and inclusivity. One of the intentions of this show, to follow the 2019 One Billion Rising Movement, is to aim to end all forms of systemic violence against womxn.

You’ve performed in and assistant directed the previous shows. Why do audiences respond to this show?

Audiences respond to truth. This show is so powerful because all of it is coming from real, unmasked womxn. It’s not polished; these stories, songs, dances, and chants, are all expressions of their cast members’ experience of identifying as, or being labeled, feminine. This will be 90 minutes of womxn talking without men interrupting them. How often do you get to hear this? What else could you want?

You’ve created a great cast full of diverse improvisers—how did you go about selecting these cast members?

Krystal Ramseur (our wonderful, beautiful, genius of an assistant director), and I discussed that what we value the most in casting this show was representing the true diversity of feminine experience. We were looking to cast womxn of color, LGBTQ+, womxn of varying ages, womxn with disabilities, womxn who don’t identify as female, and more. We wanted to give voice to those who are oppressed by white supremacy, the patriarchy, and other systems that perpetuate violence. We were also looking for those comfortable in their voice. The reality is, this community is overflowing with these talented womxn. The audition blocks were filled with this talent. These talented and diverse womxn aren’t hiding; they are all around and it’s up to all of us to listen and give them space to share their stories.

Do you have a fondest memory of this show from on or off stage?

It’s so hard to pick one fondest memory. This show has truly changed my life.

If I had to pick three:

How do you rehearse and prepare for a show like this?

We prepare by this how by being humans who have lived lives. We rehearse by fine-tuning what makes a good monologue. Also, about 5000 “THIS IS GOING TO BE AMAZING AHHH I CAN’T BELIEVE THIS IS HAPPENING!!!” texts to Krystal.

What feeling or experience do you want audiences to walk away from after seeing these shows?

I want audiences to have a great time. I want them to have cried, to have laughed, to feel hope, to feel inspired to share their own stories, and let other people tell theirs. But most importantly, I want this to be a call to action. This cast will have incredible stories are moving, and will be an incredible show. But, I want the audience to be inspired to be a part of the movement to end violence against womxn, now and for future generations.

Get tickets to The Feminine Experience.