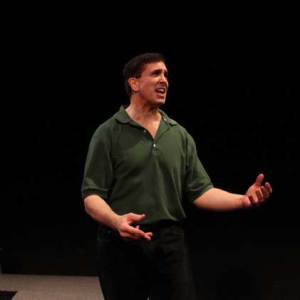 He performed with the IO teams, Luxury, Nels Diebel, Bob from Accounting, and Blaine Community Players. After returning to Maryland, Mike took classes at WIT and has been on six Harold Teams including one of the original Harold teams, Uncle DiGiorno. Mike’s favorite animal is the Fennec Fox.

He has never been invited to participate in the NFL Combine, but will go if invited. Mike would like to thank Frank Zamboni and the Zamboni family for their contributions to smooth ice throughout North America.

“Mike’s strength is that he was enthusiastic about improv and pointed out all the things he enjoyed from each student.”

“Mike had great energy and showed that he’s had a lot of improv experience. He would take great notes and give feedback after scenes about techniques that work well.”