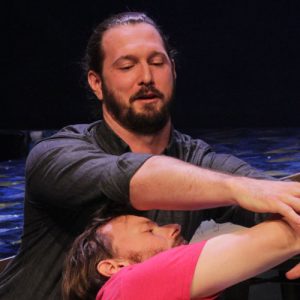 Josh Rachford's passion for improv took him to New York, Los Angeles, and Amsterdam. Now it's brought him to WIT.

Josh became involved in improv in college at UVA, where he was a founding member of UVA’s Amuse-Bouche along with SNL’s Sasheer Zamata. He completed the full improv program at the Upright Citizen’s Brigade in New York. After moving to LA, he continued advanced study at UCB there. Other study includes Second City, the Nerdist (now the Ruby), and with teachers including Matt Besser, Ian Roberts, Matt Walsh, Joe Bill, Bobby Moynihan, Chris Gethard, Neil Casey and more.

While in LA, Josh joined the Story Pirates (storypirates.org) and directed shows in schools and on tours. He’s acted in HBO’s The Newsroom, MTV’s European Music Awards, and in commercials, as well as videos for FunnyOrDie and CollegeHumor. He has appeared in San Francisco SketchFest, the Del Close Marathon, on NPR’s Marketplace, Harrah’s Casino in Las Vegas, and is in a video at a Dutch amusement park.

In 2016 Josh joined Boom Chicago in Amsterdam. There he performed five nights a week and led improv-based workshops for companies like Google and McKinsey & Co.

Alongside his interest in comedy Josh is interested in business and entrepreneurship, organizations and society, human nature, and technology. He enjoys fishing and camping, cooking, playing piano, games, and spending time with his wonderful wife.