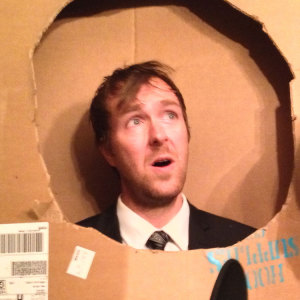 Drew Nelson was an Indiana boy, content with scripted theater until he saw the Swarm at the Upright Citizens Brigade Theatre in 2005.

New to DC, he’s currently a member of Wonderland, a house team at the Laugh Index theater. He’s studied under many exceptional teachers at UCB and was a member of the three man team Fortune Cookie with Zach Woods and Sean Clements. His other independent teams include Mudmouth and Flavor Country.

You’ll recognize him by his height, skateboard and/or anachronistic laughter during an otherwise grounded and dramatic scene. Don’t be surprised if he starts telling a story that’s lacking requisite exposition or compares you to a celebrity which makes no sense whatsoever. He does that.