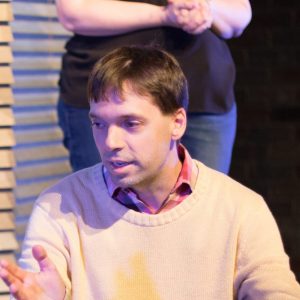 Brent did a drama day camp when he was twelve, and he didn't like the singing, dancing, or makeup - he just liked acting out plays he came up with. Twenty years later, he discovered that improv was what he wanted to do all along.

Brent started Level 1 at WIT in 2017 and finished Level 5 in 2019. He has also taken a couple of elective classes at WIT and lots of workshops. He has performed at FIST, Palooza, and Improv Brunch, mainly with his indie team Your Favorite Cookie.

Brent enjoys playing board games, listening to podcasts, and walking around the city. He has done his best to make his phone distraction-free but he is still very distracted by it.