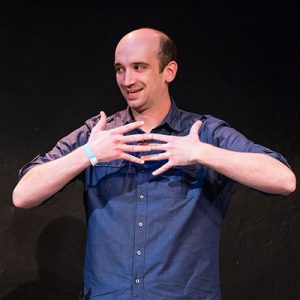 Richie Pepio: Find people with whom you like to play or whose style you enjoy watching. Then stalk them on Facebook.

Richie Pepio is a force of nature in the DC improv world. These days you can see him in one of his many groups, including Improv Actually, Cake Bagel, Fisticuffs, or one of his many duoprovs (oddly enough, you can no longer see him in the Harold group Richie…). In our interview he dives into his history as an improviser and acting student and gives his advice for aspiring duprovisers. One tip: “Find people with whom you like to play or whose style you enjoy watching. Then stalk them on Facebook.”

Ultimately, improv was a long time coming for me. According to my parents, my sixth grade English teacher told them on Back to School night, circa 1998: “Richie has a sophisticated sense of humor. It’s a shame nobody gets his jokes.” Basically, I always wanted to be the class clown but couldn’t get attention without an entire collection of stage lights focused at me.

My first intro to improv was watching my high school’s short form team, SOFA (which stands for – you guessed it – Silly Outrageous Funny Actors). They played “Party Quirks,” “World’s Worst,” and other Whose Line games. Most of them were upperclassmen, normal students by day and superheroes in front of an audience. When auditions came up, I never thought I’d be capable of creating characters and scenes on the fly, but I was conveniently forgetting all the times my cousins, friends, and I created all-improvised movies just for kicks (a ghost story called “Poultry Geese’d,” a James Bond knockoff called “Joumes Boind,” and “Time Ninjas” – about, you know, ninjas who travel through time). For me, I guess the scariest thing about SOFA was that I’d have to do it all in front of a crowd. So, even though I was terrified, I auditioned, was cast, and got over most of the anxiety by having a succession of bad shows turn into mediocre shows turn into shows-I-could-deal-with turn into shows-I-kind-of-liked… I even still perform with some of that team’s alumni (i.e. Nox’s Alex Beard).

Hollywood tells me that college is a time for exploration, and I spent a lot of my post-high school years watching comedy at the UCB Theatre. I saw the free Sunday night ASSSSCAT shows first, featuring SNL stars and other well-known New York comics. Then, I became a regular audience member at The Stepfathers and Death by Roo Roo’s shows, and have been a long form fan ever since.

What’s been your evolution in improv, across classes and groups?

I got a BFA in acting from Hofstra University and took a couple UCB classes during summer breaks, but didn’t really get to apply or fully understand what I learned until I moved back to the DC area after college. I was cast in iMusical the summer following my graduation, and that was basically the best class ever. Thrown into a group of better and smarter veteran improvisers, I felt like I was in a specialized boot camp. Not only did my scenework get a major workout, I was also able to learn how to make up decent songs and play in a narrative format. After taking a break for several years, I joined the WIT Harold program and just playing with so many different players was an entirely unique and equally beneficial learning process. As far as my evolution in improv, I don’t think I’m as physical as I was right out of acting school, but I have a better grasp on the mentality of, say, making connections and tying things together.

Early on, reading Mick Napier’s Improvise was a ton of help, too, even just for explaining I should take care of myself at the top of the scene. Before then, I often took advice like “the scene is all about your partner” a little too literally and would enter a lot of scenes with characters who weren’t as clearly defined as they could have been – leading me to play sidekicks, henchmen and Star Trek-style redshirts more than, say, independent-free-thinkers-with-hearts-of-gold. It hit home the idea of entering a scene with a clear personal deal that defines your character, giving the audience something to connect with and your scene partners something to work with.

You do a lot of duoprovs. Do you need to change your approach at all for that format? If so, how?

I tend to adjust depending on who’s playing with me. If I’m in a group of big personalities or fast players, I usually go for low status characters and vice versa. For duos, I’m not actively trying to break the record of most duos for a single person (I don’t even know what that record is… please tell me… anybody???) but I’ve gotten to know my duoprov teammates (Alex Beard, Jordana Mishory, Rich Nyman, David Richman) well by working with them on troupes, pairing with them at jams, and becoming friends with them outside of improv. Oftentimes we’ll gravitate toward the same scenic relationships, have great chemistry, or just crack each other up. Then we figure, hey, that was fun to do a two-minute scene together, let’s go for 20. From there we try to come up with a format that would be sustainable for the two of us over a longer length of time.

Alex and I both enjoy big characters and, because we’ve been friends for a while, we like to push the boundaries of good taste. With Jordana, we aim to be as grounded as possible, but we both love the hell out of wordplay and puns, and we like challenging the limits of logic in a scene – seeing how far out we can take the base reality of a given world before plunging into crazy town. Rich is a really good actor, guitarist, and my former coach, so we have a solid handle on each other’s style – with our team, RicarDOS, we play a laid back musical duo and focus on storytelling and audience interaction. And with David, he’s great at catching onto patterns and game – and for our first show we tested out this conceit in which we’re the greatest improvisers in the world. That initial performance was a blast and we decided to stick with it for future shows. We don’t need to worry about pleasing the audience because we’re playing with the illusion that we’ve already pleased them before and we’re just doing an encore of our greatest comedy bits. It’s our own personal Jedi mind trick.

What advice do you have for improvisers interested in doing duoprovs?

Find people with whom you like to play or whose style you enjoy watching. Then stalk them on Facebook. If they’re already in a duo, contact their other teammate and provide this person with a fake job opportunity on the other side of the country. Create a false company and hold a phone interview. Once the other teammate has accepted the job and moved to the West Coast, you can ask your potential duoprov partner to start a team with you.

I also think some of the best advice is to watch whatever two-person sets you can and define what you enjoy most as an audience member. Then work on what you love. Personally, I’d like to be better at multitasking, playing multiple characters in the same scene.  That said, since there are only two performers onstage, it’s probably best to keep it simple – no need to overcomplicate anything. Locally, I think ShawnMikael(s) is the tops as far as duos go. And I saw Hebecky Drysbell at this year’s DCM Cagematch, and they blew my mind. I’ve been lucky enough to see a lot of good improv, but they changed every concept I had about two-person teams, narratively and artistically.  In summary – if you do a duo, set it up so you have as much fun as possible.

You wrote a review for each minute of Star Wars. What can a minute of film do to really distinguish itself?

Thanks to social media, most of us now have the attention spans of babies, so the first minute of any movie (post-credits) is potentially its most important. It’ll tell you whether to zone out or dig in to the cinematic proceedings. And Star Wars has one of the most iconic openings of all time. The idea for reviewing each minute of Star Wars started as a joke, because every website and their father has some new kind of pop culture countdown or ranking once a week. But I thought it was too fun of an idea to pass up and, because there are 121 minutes in Star Wars, I decided to review each individual minute during the 121 days before The Force Awakens was released last December. It was daunting at first, especially because I’m a crazy fanatic with a lot to say about Star Wars, but I realized more than ever that there isn’t a wasted moment in that movie. It remains so beloved by the general public because it showed us a classic hero’s journey in a universe that was both exotic and familiar at the same time. Plus, there’s no extraneous footage or superfluous dialogue.

You know you’re watching a good film when every choice onscreen serves to establish character relationships, further the story, or chase protagonists with a Terminator.

What is the worst minute of Star Wars?

The last one. Seriously. Have YOU tried reviewing a full minute of credits?

Honestly, there are no bad minutes – only less interesting minutes, like Minute 10:00 because that’s when R2-D2 and C-3P0 walk through the desert landscape of Tatooine, and I can only take so much of non-humans wandering around without purpose. If that’s what you’re looking for, watch the prequels.

If you only had one minute for an improv show, what would be your first go-to?