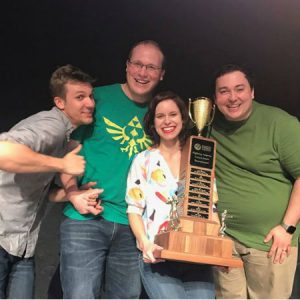 WIT took some time to talk to Childish Things about their win.

Now that the dust has settled, describe your FIST experience in three words.

Joe: Exhausting joy. Too joyful, or maybe too exhausting, for a third word.

John: In The Driveway.

What is the Childish Things origin story? How did you form and how much had you performed together before?

Henry: Jenna and I have been doing improv together since our 1A class with WIT in 2013, which was one billion years ago. We had done a few FIST runs before, and she was in the indie troupe Huggy Smalls with me for a bit. When she reached out about getting this goon squad together, I couldn’t have been happier. She’s the best human being I know. If you could let me know who else is on the team, that would be great.

Joe: When this goon squad started, I knew Jenna and John personally, but hadn’t improvised with them much. I was a big fan of them both. I didn’t know Henry existed before our first practice. I know now that he does.

John: I’ve known Jenna since we auditioned for Harold teams together. We had such great chemistry in our first scene together that I’ve spent the rest of my time in DC jumping at any chance to improvise with her. We perform together regularly on The Female Accent. Henry was a complete unknown to me (and remains so). I think what was fun about this team was that balance of “I know you / I don’t know you.” We struck the right note between familiarity and surprise.

Joe: Henry kept changing T-shirts to keep us on our toes.

Jenna: I met Henry many moons ago in 1A at WIT. I knew immediately that he was beautifully insane and wanted to improvise with him as much as I could. We went through most of the classes together, a few FIST runs, and I played with him on the wonderful Huggy Smalls for a year. I told him at the end of last year we would do FIST together again. I thought it would be great to add John to our team to balance Henry’s zaniness. John and I clicked at a Harold audition a few years ago, and we’ve played together in The Female Accent for over a year now.  Liz Sanders (ed note: of Madeline, also Joe’s girlfriend) suggested that we add Joe to the group. I knew Joe and had seen him perform and was a huge fan but had never performed with him. He told Liz he’d join but he never told us. Somehow we found ourselves at his house for our first practice.

Group chemistry is hugely important in succeeding in FIST. Did you guys gel right away? How would you describe your group dynamic?

Henry: I didn’t know Joe or John going into this, but it was pretty clear from our first practice that we were on the same page. I remember Joe playing a heavily-accented chain-smoking child who lived in the foothills, and John giving us the practice suggestion of the cool Ghostbusters toy that his Dad destroyed to teach him a lesson about cleaning up. As for me, everyone was really intimidated by how well I warmed up, which must have been pretty daunting for them.

Joe: I don’t think I’ve ever laughed so much during a group warm-up. We play this game where you stand in a circle, make eye contact with your neighbor, and try to clap at the exact same moment they do. The idea is to get in sync with your partners. Henry broke the game within 20 seconds. We had hands on knees, gasping and laughing, all because Henry hadn’t played the game before and misunderstood the rules. Exhausting joy.

John: The only bigger triumph than winning FIST was watching Henry conquer that warm-up. Strangely, Jenna took the opposite journey, which suggests that they may have just swapped bodies at some point during the tournament. But yeah, that first practice was something else. Our team came together rather abruptly, and that first rehearsal was the first indication that we had something in store beyond “just one show.”

Jenna: Henry being awful at the warm-ups had us all cracking up immediately. After that we were laughing pretty much start to finish every time we practiced.

You used childhood toys as your audience suggestion. How did that come about?

Joe: No idea. But one time, during practice, Henry revealed that one of his favorite childhood toys were fireworks. This is the man you all gave a trophy.

John: The idea was entirely Jenna’s. Enter to “Glory Days,” ask for a childhood toy, make sure we played more adults than children. I was just looking through our original e-mails to confirm that I’m remembering all of this correctly, and it’s incredible to see how much of this she had figured out before we started talking about it. We did have a few tweaks as a team, and I think a big one was making the opening into a short interview rather than just a toy suggestion. Our idea was to learn about an important or memorable friend, but as we quickly found out, people often thought of toys that they’d play with by themselves. We wound up creating a lot of profoundly lonely people on stage.

Joe: And offstage. Not all audience members leave happy.

Jenna: The idea for a childhood toy popped into my head randomly before I asked John and Joe to join Henry and me. Everybody has a story behind their favorite toy. I thought it could reveal some vulnerability and quirks. During rehearsal John said one of his favorite toys was the game Mall Madness, Joe’s was a giant ceramic tortoise from Mexico that he would sit on, Henry’s toy was fireworks. I loved the McDonald’s toys that were food but turned into dinosaurs. You learn a lot about a person when you find out what they played with as a kid.

Henry: For instance, that some people will sit down and purposefully play with a stick in order to give you a hard time at an improv show decades from now.

John: Stick Guy, if you’re out there, thank you for being the villain every hero needs.

What was your favorite moment from FIST XI—on-stage or off-stage?

Henry: I am a sucker for bad puns. In our very last set, we were doing an extended camping scene in a run inspired by the deadly childhood game Crossfire. Relationships were ruined, secrets revealed, and we were all glaring at each other over the embers. Across, one might say, the fire. I’m still excited about that surprise origin story.

Joe: I don’t know if that’s a pun or a very sophisticated metaphor. In our Power Rangers show, John and I played brothers that weren’t allowed to see each other. I ended up building a canoe to sail to Brother Land, a place John built just for us. We got there and tried to play catch in defiance of our parents, miming in slow motion. John got ‘hit’ in the face, and the time ran out in our show at the same instant, so the lights went out. It was perfect timing. Lord, describing improv shows after the fact is intolerable.

John: Henry and Joe have hit the on-stage highlights I would have went with. So I’ll add an off-stage moment that delighted me: during our first show, some Springsteen fans gave us as a hallmark “Bruuuuuuuuuuuce” as we entered to “Glory Days.” When we got off-stage, a slightly rattled Jenna asked, “What jerks were booing us during the introduction?!”

Jenna: I have a laundry list. Joe and Henry mentioned some of my favorites already. I also enjoyed our Lite-Brite show, getting to be a psychedelic butterfly was fun. Watching Henry pretend to be on a Sit N’ Spin was another highlight. Off-stage would probably be us sitting upstairs after performing and forcing Henry to list ten sports he knew and watch him struggle. Two sports he listed were camping and squirrel flying cape thing.

Did you have any pre-show rituals or special warm-ups?

Henry: We did three-line scenes using our fingers as puppets. There was an accompanying song. It is my new favorite warm up. I also asked the others what the name of our intro song was every show. Bountiful Evenings?

Joe: Glory Days. Every time. We had three thousand shows in March and April, and every time it was Glory Days. We would occasionally challenge Henry to name as many bands as he could (less than ten) or put Henry on trial for trafficking ferrets across state lines. Henry was a pretty good sport.

John: So many. I became pretty superstitious by the Sweet 16. When we promoted shows, I always made a video with my daughter dancing around to “Glory Days.” (She genuinely loves it, I swear!) Before our shows, we would run the same warm-ups — Badidit, Where Have My Fingers Been, Clap Pass, and then a run of the show because it’s HARD to fit in rehearsals during the tournament. When Joe introduced a variation of Where Have My Fingers Been during the final weekend, I was certain the break from ritual would be our downfall.

Jenna: We did the warm-ups John mentioned pretty religiously. During our pre-show run we mostly just tried to make each other laugh. I think we focused on each other and shut out the idea that we were even competing. Any anxiety I had pretty much went away when I was unsuccessfully Badiditing and laughing with them.

What would you say to future FIST hopefuls?

Henry: Take advantage of the chance to improv with new people! We have a weird, very supportive DC improv community, and there’s a lot you can learn from going onstage with some fresh faces. Joe and John and Jenna all had a lot to teach me about bands, and sports, and about using cups to drink water out of sinks. Also, wait until after your last show to pitch changing the troupe name to the H-Js.

Joe: Enter to Glory Days, ask the audience about a toy, have your toddler dance in promo videos. The day before a show, I tried to make sure I was well rested, a little caffeinated, mostly off of Facebook, and focused on other things. Before the finals, a few people tried to give us sports-inspired pep talks. “You got this!” and “I want to see blood!” don’t help me before an improv show. They help before sports. Frankie says relax.

John: Take it easy! I performed in FIST for the first time last year, invested a lot of time in it, and we were bounced immediately. (I performed on that night the entire Metro system was abruptly shut down for emergency work.) I think I learned that, obviously, there’s a lot of things out of your control (like how your friends will even get to the show). But beyond that, the one thing you can control is how you feel about the show as you exit the stage and head upstairs. For me, that was the revelation of Childish Things—the highs came as we left stage, not as the winners were announced. All that said, winning every round is also a great way to win the tournament.

Jenna: Take Ranitidine for acid reflux, it’s the generic for Zantac. It gets the job done at half the price! Also: Find people that make you crack up. All I wanted to do was have fun, and the only reason I wanted to keep winning was so I could keep doing shows with these fools. Win or lose, everyone mostly forgets about FIST the other ten months of the year. Just find your people and have a blast for as long as you can.

John: Wait, people are going to forget about us?