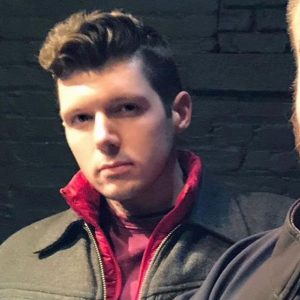 You may not have seen Ryan McClure on stage for many of the shows he’s been involved in, but you have definitely noticed his expert lighting and sound design that elevates shows to their greatest potential. Ryan’s work includes the light and sound design for Heavy Rotation, where he brought the rock and roll improv to life. We wanted to learn a little more about the person up in the booth at your favorite shows, and he was kind enough to walk down all of those stairs and respond.

How did you get started doing improv? And what made you want to start volunteering for WIT?

I started doing improv because I was looking for new, fun things to do after a break-up. Of all the things that I did, improv, by far, was the most fun. I love the creativity, fun, humor, and social aspects of improv. I started off taking short-form improv classes, and then I took long-form improv classes at WIT. I started volunteering as a way to see more shows and get volunteer hours that could be used get discounts on classes and workshops. I continued to volunteer because I love being able to contribute to the improv community in DC.

What do you like the most about doing booth?

There are so many amazing improvisers who perform at WIT, and I like being able to support them during a show, whether it is by picking lights that enhance their scene or choosing a good button line for a blackout to get one last laugh at the end of a show. It makes me happy to contribute to their creativity and success.

Do you have a favorite moment in your history of doing booth of helping to support a performance?

iMusical, in their Apocalypse How? run of shows, had a really fun intro where the whole cast sang an opening number that ended in a blackout, which was immediately followed by one cast member singing a solo in a spotlight, which then segued into the opening scene. The audience always loved the blackout. It was very dramatic and, from the booth, really fun to do.

You were the dedicated booth operator for Heavy Rotation. How was working with Heavy Rotation and what was your process with the sound/light design?

Working with Heavy Rotation was really fun. Eric Acuña, the director, came up with a great idea, and executed it really well. I had a lot of leeway with choosing what lighting to use during scenes and for songs. For example, I changed the color of the lights to match the tone of the song, or threw spotlights on the singer(s) if they were on their mark. Ray Simeon, WIT’s production manager, came up with some really neat lighting effects to use during the last scene of the show, which was when the band played at their concert. I felt that that really enhanced the final scene. I liked being able to contribute that to the show.

You get to choose the music to introduce teams. What guides your choices?

I always try to honor the intro music requested by the teams. But, if there’s nothing requested, then my default is Cover Girl by RuPaul. I think it’s a fun, upbeat song to come out to. I’ve seen some teams bust out some great dance moves to it. If there’s more than one team that didn’t put down an intro music request, I play a pop song from the 80’s to mid-00’s (which is basically the extent of my musical knowledge).

If you had one piece of advice to performers on how to help make their performances better from a tech standpoint, what would it be.

If you plan to have a spotlight during your set, make sure that you go to, and stay in, the mark indicated on the stage. Going to the general vicinity of the mark, but hovering nearby or walking around it, may leave part of you in shadow.