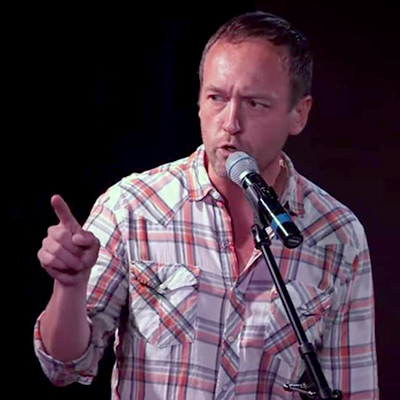 As anyone who’s ever had to make up a quick backstory for their character in an improv scene knows, telling a convincing made-up story is a crucial skill. No one knows that better than the storytellers at D.C’s Perfect Liars Club, which takes traditional storytelling a step further into a full-blown interrogation. Each show features four storytellers, only one of them is lying. Afterwards, audience members question the storytellers to suss out who’s fabricating. These shows often feature WIT students and teachers putting their improv and lying skills to the test.

Pierce McManus, a D.C.-based storyteller and communications consultant, co-hosts Perfect Liars Club each month. We spoke with him about his approach to storytelling and how to think on your feet when you’re making things up as you go.

Most storytelling shows don’t encourage lying, much less advertise it as a feature. What drew you to the Perfect Liars Club?

I was lucky enough to appear in the very first Perfect Liars Club when it was started three years ago by fellow storyteller Layla McCay. I was immediately drawn to the show’s unique format. It’s a humorous combination of storytelling, audience participation, and improvisation that has really struck a chord with D.C. audiences. Our rambunctious crowds and their interactions with the storytellers is really what makes the show so special. When Layla and her wife relocated to Japan last year, she turned the show’s reins over to me and my co-host Cara Foran, another Perfect Liars Club regular. We are having an absolute blast producing the show.

Your format requires storytellers (particularly the liars) to think on their feet as they field questions from the audience. What do you notice about the liars who can pull it off best?

Our most successful liars are the storytellers who are so convincing when telling their tales that they don’t arouse any suspicion among the audience members and aren’t besieged with questions during our interrogation round. Short of that, one of the keys to being a successful liar is knowing your backstory — time, place, geography. Not a show goes by without at least one audience member having intimate knowledge related to some element of each of our storytellers’ stories. How the storyteller responds can mean the difference between being a “Perfect Liar” or a “Hopeless Liar.” Remarkably however, in the three years that Perfect Liars Club has been around, the audience has a woefully poor track record in actually identifying our liars.

What the best lie that you’ve seen someone get away with? What’s the worst?

We’ve had so many great shows with so many great storytellers, it’s hard to pick any particular one as the best. That being said, a very talented storyteller convinced the crowd at a recent a show that she had been a makeup artist on a porno shoot in Los Angeles. Another one our favorites involved an industrial accident at an ice cream factory in Lancaster, Pennsylvania. The worst? A frequent Perfect Liars Club storyteller was busted for claiming to be an Adele impersonator. The audience didn’t buy it. Another story about a business presentation jeopardized by computer troubles was quickly debunked by a group of computer experts in the audience.

There seems to be a lot of overlap between storytellers and comedians (both stand-up and improv). Why do you think that is?

Both storytellers and comedians rely on experience and observation for most, if not all, of their material. The really talented storytellers and comedians are those who have the talent and ability to effectively and amusingly communicate what they’ve observed or experienced to an audience in way that is completely relatable while uniquely filtered through the performer’s personal point of view.

What improv skills do you think translate best to storytelling? Or vice versa?

Just like improv, character development is a key component of storytelling. A storyteller needs to be able to channel all the characters in his or her story quickly and effectively, not solely by voice alone, but by mannerism, accent or affect, using as few words as possible to paint a portrait of someone that everyone in the audience can both visualize and immediately recognize.

There’s lots of people out there with crazy anecdotes. What needs to happen to make that a great story?

Well, for starters, there needs to be a beginning, a middle, and an end. What was your motivation? What changed? In the end, what was learned? More importantly, what was at stake and why should I really care? Everyone loves to hear about that time you and your college pals got drunk and went cow tipping. It’s hilarious. But give it some context. Give it some meaning. Reveal something about yourself. What about this particular event sticks with you? Why? After you answer those questions, you’ve got the beginning of a great story.

To get at storytelling and narratives more generally, what do you feel makes for a compelling narrative, either real or fictional?

I think the most compelling narratives are those that combine elements of humility, vulnerability, insight and humor.  Whether you’re telling a story about a life-changing experience or a bus ride home after a long day at work, if you incorporate those elements into a story, you’ll have the audience on the edge of their seats, guessing where you’re taking them until the very end.

Any other tips for the budding young liars out there?

The best liars never get caught, so learn from the mistakes of the hopeless liars who do.

Catch the next Perfect Liars Club on Wednesday, June 1, at The Bier Baron Tavern. They will also be doing a five show run in July as part of this year’s Capital Fringe Festival. For tickets and more information, visit perfectliarsclub.com, friend them on Facebook, and follow them on Twitter and Instagram.