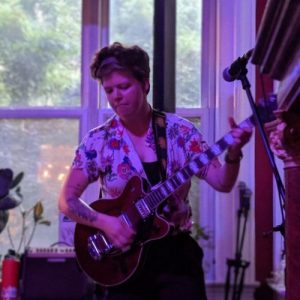 Oona cried audibly in a super-sized Bi-Lo after a college improv audition, then vowed quietly in the dairy section they would learn to love to fail. Now Oona enjoys failure on a semi-regular basis.

They have regularly performed for about a year with a few different teams in DC and Baltimore. And now Oona currently performs with the indie teams Founding Fathers and Grandma’s Fire Blanket, aside from the Harold program.

One of Oona’s worst injuries ever was from riding the neighbor’s tiny tricycle down a hill then throwing theirself off of it because of a poor braking mechanism and mostly an incoming tree.

Oona had a cat named Karma when they were very small, which was and still is the primary basis for their moral compass.

Their favorite soup is made by a Scottish woman that they call Joseph who now is currently in Nepal, not making them soup.